Like many American families, we are a multicultural family. He’s from France, born and raised. I am a first generation American of Indian immigrants (often referred to an ABCD – an American born confused Desi with Desi being a term referring to people of the Indian subcontinent). We solidified our relationship in California, which in some respects seems like its own country (much like NYC, where I am from). This has introduced a blend of cultures that has found its way into my food. Just this past week, my husband was sworn in as an American citizen – well a dual American French citizen (yes he is dual AF) and I wanted to celebrate with a feast. I chose to center this feast around the Cali Mex cuisine with a twist. Lettuce taco bout plant based cuisine: lettuce wrap tacos with plant based taco meat. The meat was re-purposed into  a collard wrap burrito. And there was was also a cashew based queso because chips and dip please. 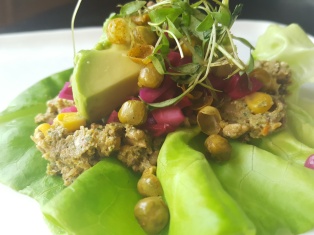 I may be the brown one and he may be caucasian, but I am the born and raised American citizen and he was the immigrant. That is the beauty of America. It is a melting pot and a mishmosh of cultures and tradition. We must celebrate that diversity. And American food today leverages taste, technique and combinations from so many different cultures. I wanted our celebration of America to be a multicultural affair of food and it sure was a feast from around the globe.

There are many recipes out there for veggie meat – some using lentils, some using grains, some using soy. But I wanted to make something that I could eat for when I am challenging myself with Whole 30 or trying to reduce grains, beans and lentils. As you may have seen from another about stuffed peppers, I made a plant based meat. Using this base recipe, I modified it slightly to make the filling for this taco and burrito. The other key component to this dish is a purple cabbage slaw which can be made with numerous vegetables, but the purple adds a bit of color, crunch and vitamins, while the overall slaw adds acid and flavor to the dish. The rest are the toppings you want to add. I like sprouts, avocado and something crunchy. I used crunchy spiced peas which made me feel like I was adding something Indian to this French, American, Italian, Cal-Mexi feast. The crunch gives a nice texture without adding too much additional flavor.

The only things left is assembly of the taco and burrito. The taco is simple, so let’s start with that. I used a butter or boston lettuce because the leaves are crunch and fold up into a taco. I made a platter full of tacos. 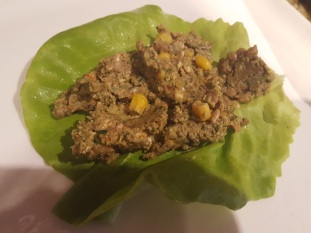 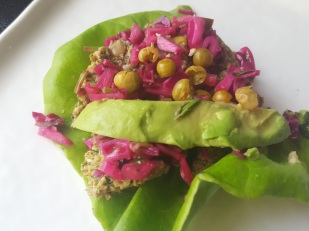 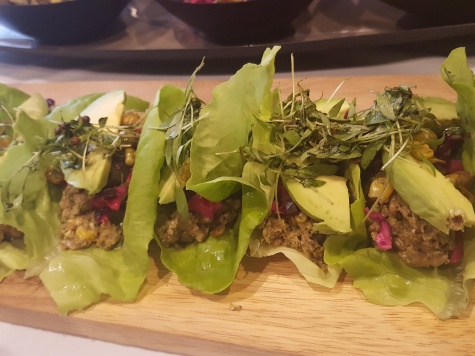 Now all you need to do is eat.

The burrito wrap was done using collard greens. Collard greens are hearty leaves and so must slightly cooked to be able to be used as a wrap.

After you wash the leaves, place them on a cutting board, stem side up. Cut off the stem at the bottom and using either a small knife or vegetable peeler to trim the remaining stem further so it is even with the leaf, or at least thinner. 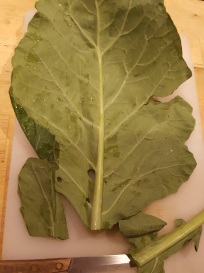 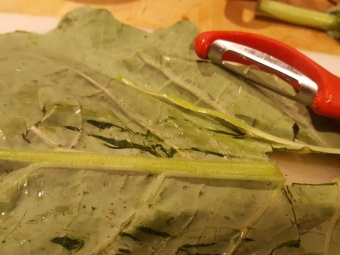 Place a small amount of water for steaming in a large wide pan. Just enough water to coat the bottom with a thin layer. Place one or two leaves down, in a slightly circular pattern so they are not evenly on top of each other and sprinkle a little salt on the leaves. Lay 2-3 more leaves down and top with a touch of salt. 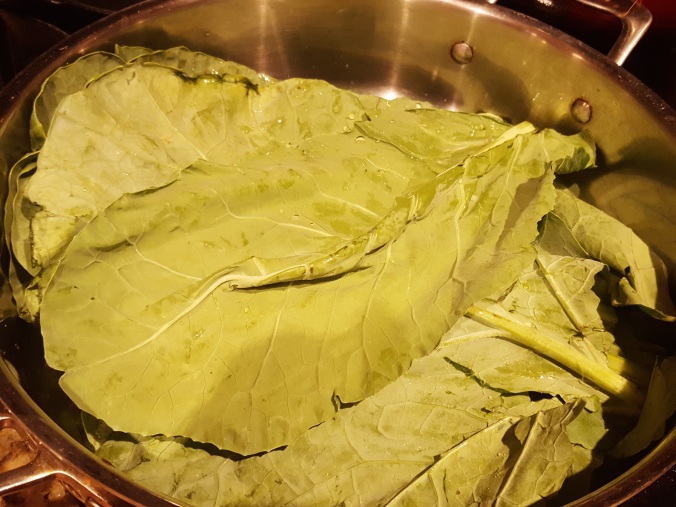 Remove the leaves and transfer to a baking sheet to cool. Place one on the cutting board stem side up. Place some of the plant based meat to make up the bulk of the burrito. 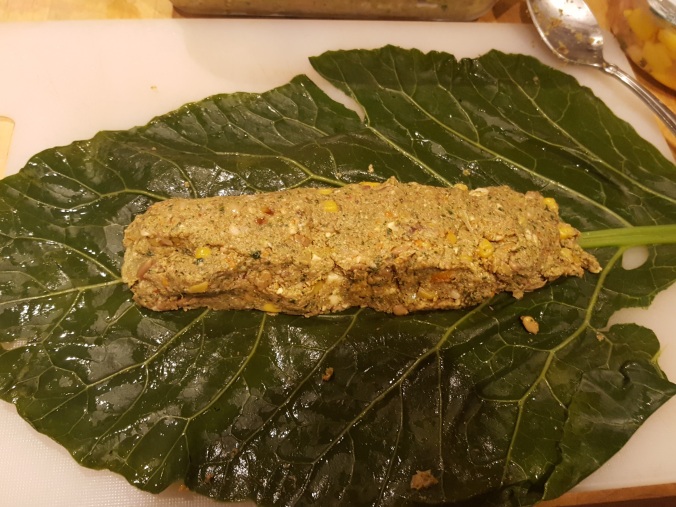 The fillings are up to you. I had to travel for work and could not eat the tacos, so I used the same ingredients in this burrito wrap. It held together well for a meal on the plane. I also used a cashew lime cilantro sauce.  Fold the top and bottom before wrapping the sides. The wetness of the collard leaves will help it stay together. 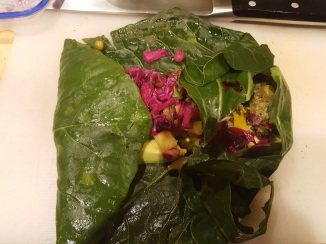 Wrap it in parchment to store or dig in. 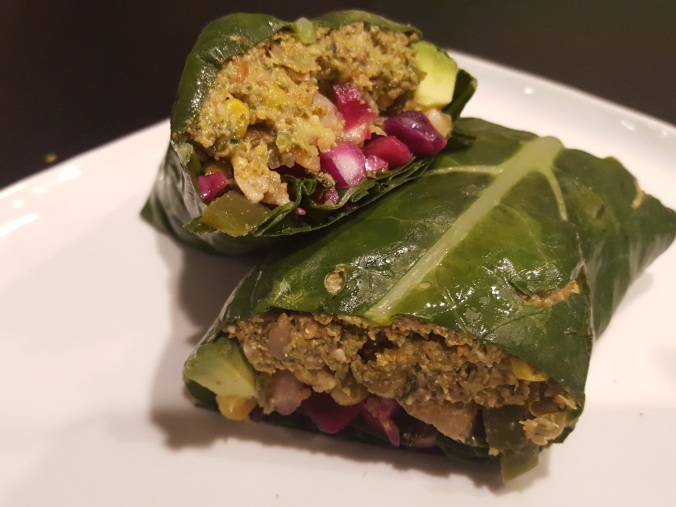 The queso can be made simply by buying a can of tomatoes and chilies (rotel being the most popular, but there are other companies like hatch and muir glen which make more “healthy” canned varieties) or can be a bit more complicated by making your own. Making your own is not that hard, just more time consuming as it takes time to cook down the tomatoes. Simply put the tomatoes, peppers and spices into a saucepan and cook down for 40 min to one hour until reduced. You want it to be thick and chunky and not too liquid and will use about a cup in the recipe.

Soak cashews for at least four hours up to over night and drain. Place into a high speed blender with lemon juice, salt, nutritional yeast and tumeric and blend until smooth. Remove from blender and mix with the tomatoes and chilies.  If using the canned variety, make sure to drain the liquid first. Taste to adjust for salt and spice.

I served them with vegetable chips and nacho chips. 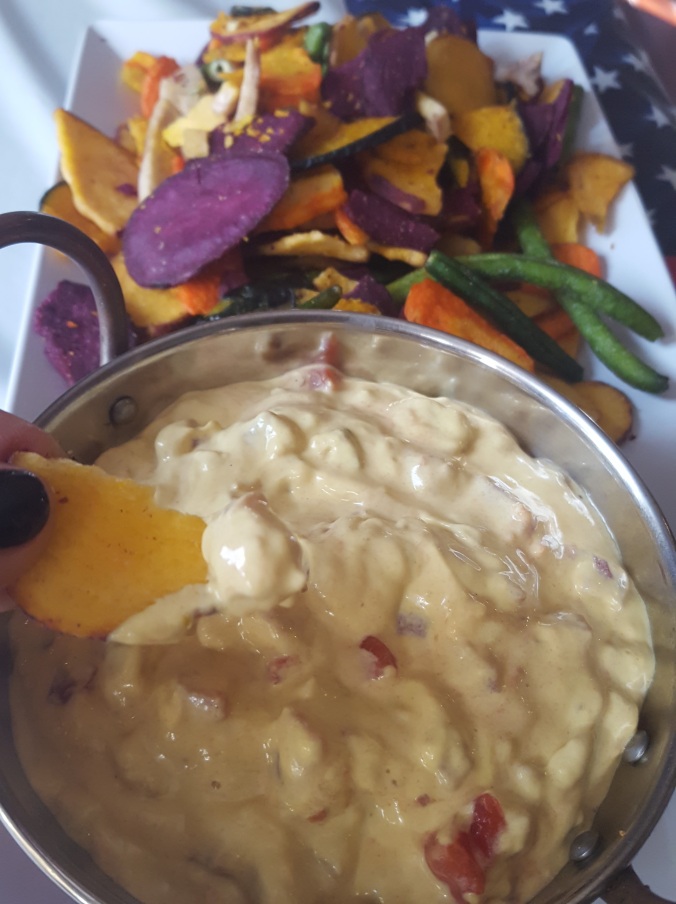 I also used the dip and made it into a plate of nachos loaded with veggies. 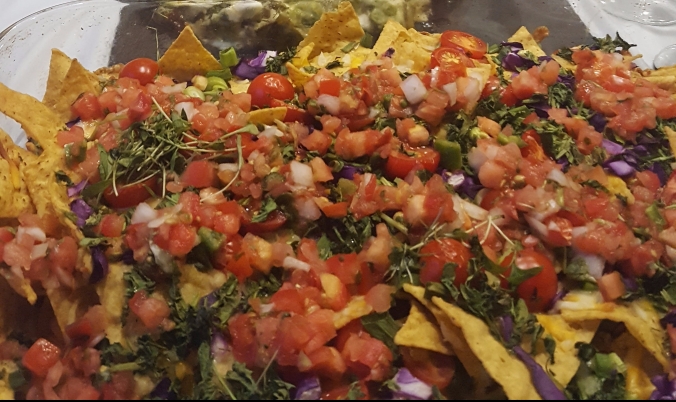 It was quite a feast. 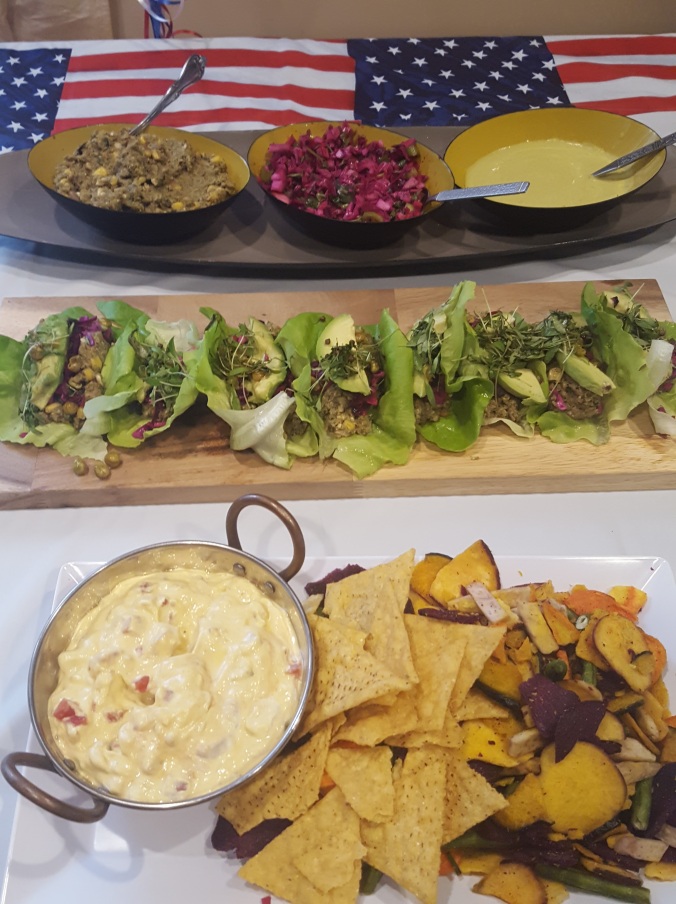 We had a great time celebrating with our multi cultural community.

Heat the oven to 400 degree F. In a large pot, heat up coconut oil. Add in ground cumin and let cook for about 30 seconds or until fragrant. Add in chili powder and onions and saute until they are translucent. Add chopped cremini mushrooms and cook them down for about 5-10 minutes to let the juices out. Add in 1 cup of veggie stock and reduce slightly before adding in chopped carrot and bell pepper and cook down, uncovered for about 5-10 minutes. Add in garlic, baby spinach and liquid smoke and stir well and remove from heat. Using a food processor or a hand blender, blend until chunky like ground meat.

Separately grind almonds and  walnuts until fine and flour like. Add the ground nut flour to the plant meat along with 1 cup sunflower seeds, oregano, corn, cilantro and mix well. Taste for salt.

Add tomatoes, jalapenos, and spices to a saucepan and bring to a boil. Reduce heat and let simmer for 20-40 minutes until tomatoes are cooked down but still thick and chunky.

Place cashews, nutritional yeast, salt, turmeric, and lemon juice into to a blender with about 1/4 cup of water and blend until creamy. Add water a tsp at a time as needed to make smooth but do not add to much water so mixture remains thick like a cream.

Place into a bowl and fold in the tomatoes and chilies. Taste for salt and spiciness.