I have the chemical symbol for capsaicin, the active ingredient for a chili pepper, tattooed on my arm because I think spice adds to life. Since moving to Cali, I have been noticing hatch peppers – a large spicy chili from New Mexico – at the beginning of fall. I was feeling the need for some spice to shake up my life. Rather than just add the flavor of the hatch to a dish, I decided to stuff them with a plant-based meat made of mushrooms, veggies, nuts and seeds and top it with a plant based “crema” made from cashews, lime, nutritional yeast and cilantro. The filling was robust, light yet rich and satisfying and the “crema” provided the perfect sauce with acid to cut through the richness. The hatch…well the hatch was spicy spicy spicy.  Beware the hatch – the spice did not leave my fingertips for days even with multiple washings and milk soakings. If they are too spicy for you, stuff a jalapeno or a bell pepper. We tried them all and they were all equally amazing. 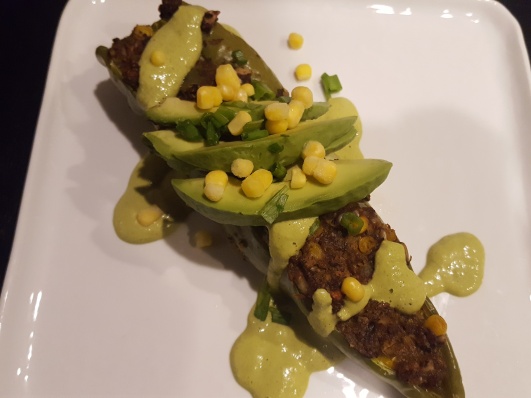 I’ve been in a bit of a funk lately and really haven’t had a desire to create or even cook. Rather than continue to feed into that cycle, I pick up something different at the store and hope it inspires me. This time it was hatch peppers. I was supposed to meet a friend for a drink to talk, but it felt too “peoplely” out there and I really did not want to go out so I invited her over for dinner. The hatch inspired me – I started by cutting them in half and removing the seeds. Hatch is a spicy pepper. I suggest using gloves. The heat sneaks up on you and grows in intensity – like a ghost pepper – before it subsides. It can be painful to the eyes and nose and washing hands – with soap or milk – does not remove the burn. 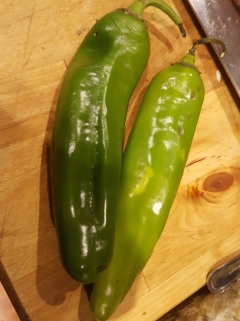 To make the plant-based meat to stuff inside, heat up some coconut oil and add in ground cumin and let cook for about 30 seconds or until fragrant. Then saute onions in the cumin coconut oil until they are translucent. Add chopped cremini mushrooms and cook them down for about 5-10 minutes to let the juices out to coat the onions with. I used cremini but portobello could be used as well – they will require a bit more cooking itme. Add in 1 cup of veggie stock and reduce slightly before adding in chopped carrot and bell pepper and cook down, uncovered for about 5-10 minutes. Add in garlic, baby spinach and liquid smoke and stir well. 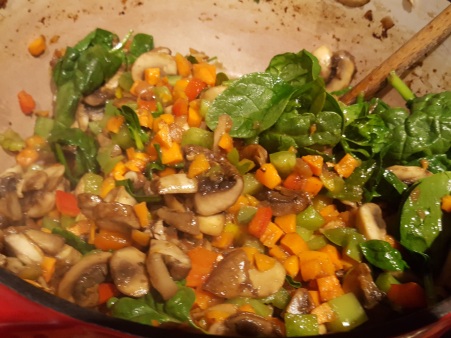 Remove from heat and using a food processor or a hand blender, blend until chunky like ground meat.

Separately, grind 1 cup of raw almonds and 1 cup of raw walnuts until fine and flour like. Add the ground nut flour to the plant meat along with 1 cup sunflower seeds, oregano, salt and corn. Taste for salt and favor.

Mix thoroughly. The mixture should be moist but there should not be any liquid. If there is too much liquid, add more nut flour. 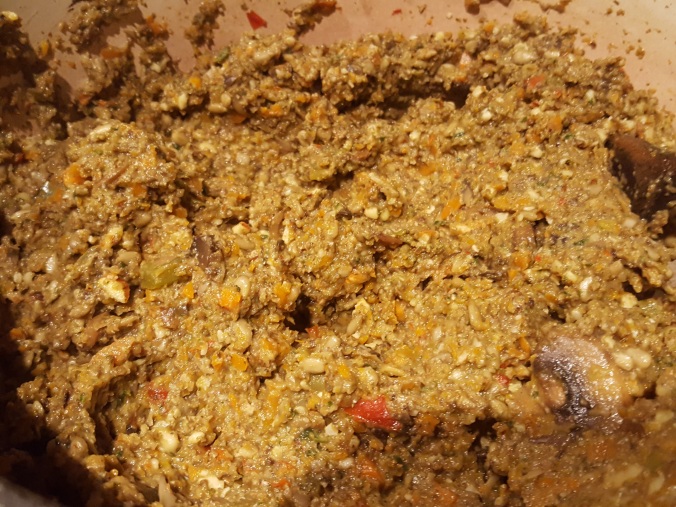 Grease a pan with coconut oil. Stuff pepper halves with plant meat and place in the pan. 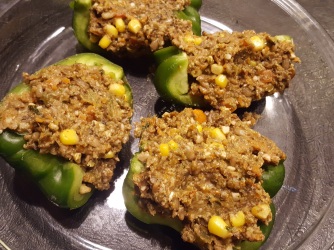 Bake at 400 degree F for about 45 minutes until peppers are tender and meat is browned on top.

While the peppers are baking make the crema. Traditional crema is dairy based and has a slightly sour but pleasant taste. Dairy helps cool and counteract the heat. This vegan based crema has a nice acid to brighten up the taste and a cooling effect but will not counteract the spice of the hatch.

Soak cashews for 4 hours to overnight. Drain the cashews and place into a high-speed blender along with ground flax, nutritional yeast, lime juice, lime zest, cilantro, salt and 1/4 cup water and blend until smooth. Add teaspoons of water as needed but make sure not to add too much so mixture is creamy rather than a liquid.

The meat is so nice – light and filling.

Made only with plants, seeds, nuts and fungi. 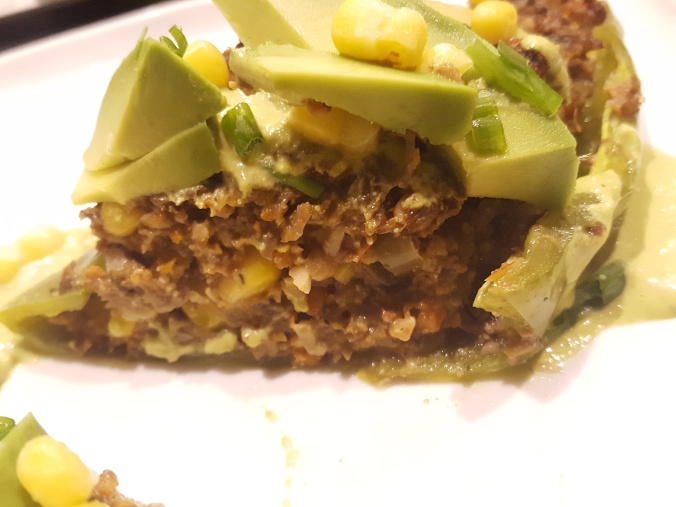 I may not be out of my funk, but it added the bit of spice I needed in life to keep me going. Happy Eating! 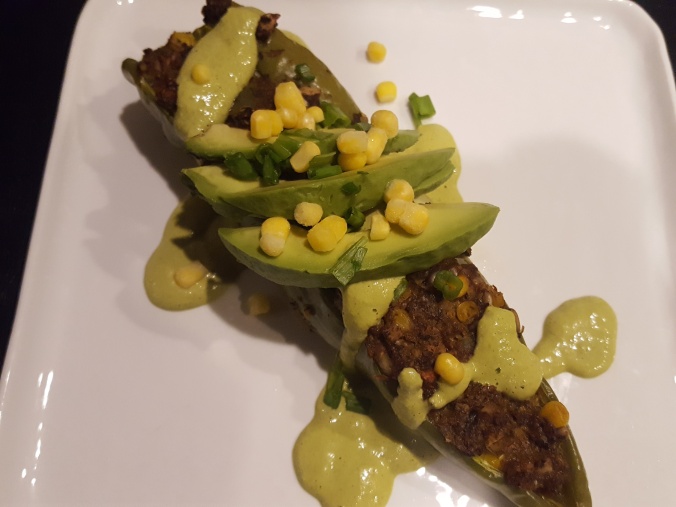 Heat the oven to 400 degree F. In a large pot, heat up coconut oil. Add in ground cumin and let cook for about 30 seconds or until fragrant. Add in onions and saute until they are translucent. Add chopped cremini mushrooms and cook them down for about 5-10 minutes to let the juices out. Add in 1 cup of veggie stock and reduce slightly before adding in chopped carrot and bell pepper and cook down, uncovered for about 5-10 minutes. Add in garlic, baby spinach and liquid smoke and stir well and remove from heat. Using a food processor or a hand blender, blend until chunky like ground meat.

Separately grind almonds and  walnuts until fine and flour like. Add the ground nut flour to the plant meat along with 1 cup sunflower seeds, oregano, salt and corn and mix well. Taste for salt. Stuff pepper halves and place peppers into a greased baking tray. Bake at 400 degrees F for about 45 min until peppers are soft and meat is slightly browned on top.

Meanwhile add soaked cashews, nutritional yeast, ground flax seed, lime juice, lime zest, cilantro, and salt to a blender with about 1/4 cup of water and blend until creamy. Add water a tsp at a time as needed to make smooth but do not add to much water so mixture remains thick like a cream.

One thought on “Down the Hatch: Hatch Peppers Stuffed with Vegan, Grain-Free, Plant-Based “Meat” Topped with Dairy-Free Cilantro-Lime “Crema””