Today is the Chinese new year – year of the monkey. On my way home I smelled mushrooms cooking in some sort of soy sauce and it made me crave something Asian with mushrooms. I have really grown into mushrooms over the last few years. I used to hate them…all the way into adulthood until I finally tried a dish at one of my favorite vegetarian restaurants in New York City called Zen Palate. It was called mushroom forest and and was a chopped medley of shiitake, wheat gluten or soy, celery and other goodness that was eaten in a lettuce shell. Since coming to Calfornia, I have been making something similar, but without the wheat gluten or soy, and that is full of nuts and seeds for protein. It is shiitake, kale, carrot, pumpkin seed, sunflower seed, pine nut medley served in a lettuce wrap. And it was perfect for a new year celebration.

This is a very simple recipe and leverages the availability of soy-free and rice-free sauces and vinegars – coconut aminos and coconut vinegar. But you can easily use Bragg’s liquid aminos and rice wine vinegar. 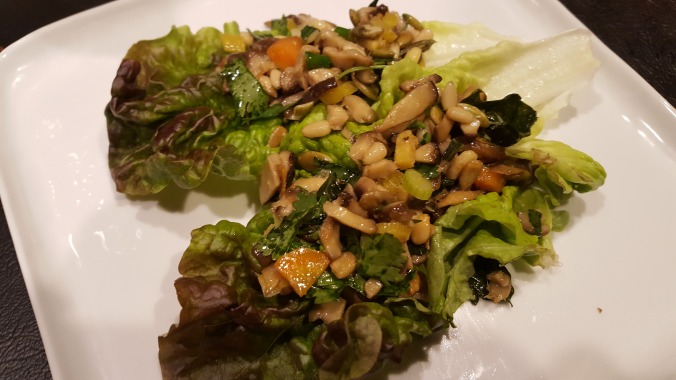 First I made a sauce of ginger, garlic, salt, cayenne, coconut aminos and toasted sesame oil. I grated the ginger in a microplane so that it was finely grated and got the juice out. However, you can just chop it finely or grate it in a larger grater. I set it aside and cooked the mushrooms in coconut oil until browned and fragrant (about 5 min).

I added in chopped tuscan kale and carrot. I used tuscan kale – also known as dinosaur or lacinato kale – because it is tougher and holds up better when sliced thin or shredded and cooked. Curly kale is fine, it just requires a shorter cook time.

After five minutes of cooking, I poured on the sauce, tossed the veg and removed it from the heat quickly and placed it into a bowl. Simply add in the pine nut, sunflower seeds, pumpkin seeds, lime and scallion and toss.

Boston, bib or butter lettuce forms better lettuce cups making it easy to eat, however, I was not able to find any. So I served it on red leaf lettuce. And it was great.

Place the garlic, ginger, salt, cayenne, coconut aminos and sesame oil in small mixing bowl and whisk until blended and set aside.

In a skillet, over medium heat, add coconut oil and mushrooms. Sautee for about 10 min until mushrooms are golden brown and fragrant, stirring every so often. Add kale and carrots and cook for another 5 minutes. Add the liquid spice mixture, toss and ocat evenly and immediately turn off heat and  transfer to a bowl. Add sunflower seeds, pumpkin seeds, pine nuts, scallion and lime juice and mix thoroughly. Add salt or coconut aminos to taste. Place lettuce leaves on a plate or tray and spoon about 2 tablespoons of the mixture into each lettuce piece.