It’s finally winter in southern California…if you can call a high in the low 60’s winter (The east coaster in me thinks it is summer year round here and can’t tell one year to the next). But it’s all relative and given that it is no longer 90 degrees F outside, I can wear my boots, sweaters and scarves and actually feel like eating the potatoes that make an appearance in my CSA box every so often. In a healthy way – layered with veggies and lentils, garnished with either goat cheese or smoked shiitake “bacon” for an extra boost of flavor. 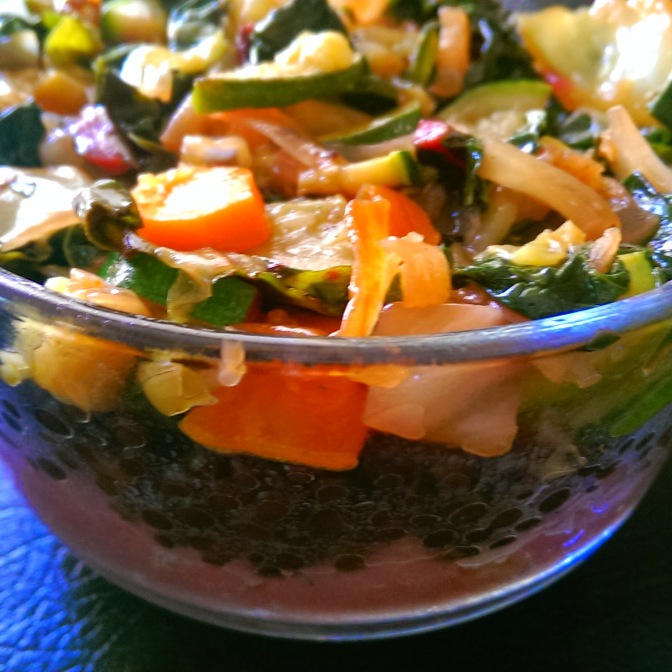 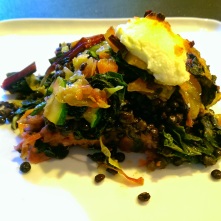 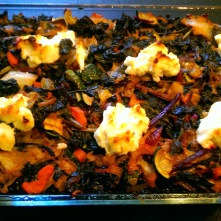 It’s just a few days post-Thanksgiving and I enjoyed the holidays with an indulgence in cheese. For a friendsgiving, I made a pumpkin stuffed with fontina, gruyere, swiss chard, smoked seitan, home made breadcrumbs and spices with a side of roasted brussel sprouts and pecans and apple roses and prunes poached in port and spices for dessert. Others made roasted squash with cinnamon, green beans, mushroom ragout and more. I was stuffed, like my pumpkin. My two-year old pointed to my belly and questioned”baby in there?” Why yes, a food baby. 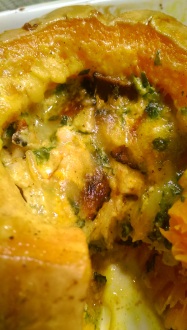 Surprisingly we all made lots of veggies and all avoided mashed potatoes or mashed veggies of any kind. I found the non traditional meal more entertaining but part of me missed the mashed root veg or cauliflower I typically make for Thanksgiving.  So, when I opened up my CSA box to find it filled with a beautiful variety of purple potatoes, the first thing that came to my mind was mashed potato.

I once wrote about the beauty of adding color and variety into our diet. Colors add different nutrients that we may or may not get, and also can stimulate our digestion by stimulating our eyes. There is more than one kind of purple potato – some with a more purple skin than flesh, some so deep purple that it stains like a beet. They originate from South America – specifically Peru and Bolivia. They have the texture and taste of a Russet with roughly the same amount of calories but with four times the antioxidants. All potatoes are high in potassium which can help regulate blood pressure but purple potatoes have been found to be more effective in doing so compared to a Russet.

I scrub them but leave the skin on – I like the rustic look and taste, but you can peel them as well I mixed them all together, cubed them for a quick even cook and boiled them until tender with a fork.

Once cooked, I strained them, mashed them with olive oil, ghee (I’ve also used coconut oil for vegans or butter), chopped rosemary and thyme, sauteed shallot, garlic and balsamic vinegar. Balsalmic cuts through the fat (fat is essential for a good mash) and adds a surprising but pleasing tangy flavor that takes an ordinary bake to the next level. 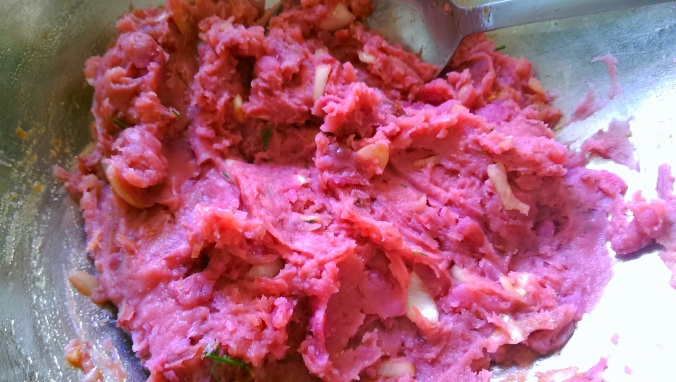 The key to cooking the lentils is infusing flavor as they cook. I fried spices then added a home made veggie stock and water to cook them. I like beluga because they are small, whole and firm – even after cooking – adding texture to the dish of softened veg and mashed potato.

For the veg, the key was to use a variety. I had lovely beet greens left over from beets I has cooked earlier, along with swiss chard from the garden, cabbage carrots and zucchini. In a second batch I added some broccoli florets. You can use any veggie you’d like – bok choy, carrot tops, bell peppers, dandelion greens, kale, brussel sprouts – the key is the flavor, a variety of color and not over cooking them. I cooked them gently with a bit of my veggie stock to infuse them with flavor. Let the liquid cook off but don’t overcook the veggies – they should be tender but not mushy. Overcooking will kill the nutrients, release too much water and turn the greens bitter. 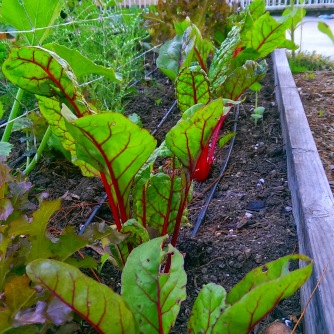 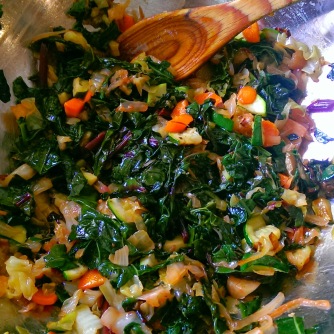 After layering the potatoes in a dish, I layered on the cooked lentils followed by the veggies.

I made some individual portions as well which I stored in the freezer for lunch later in the week. I have stored these for up to a month after baking – they can be thawed and quickly reheated. 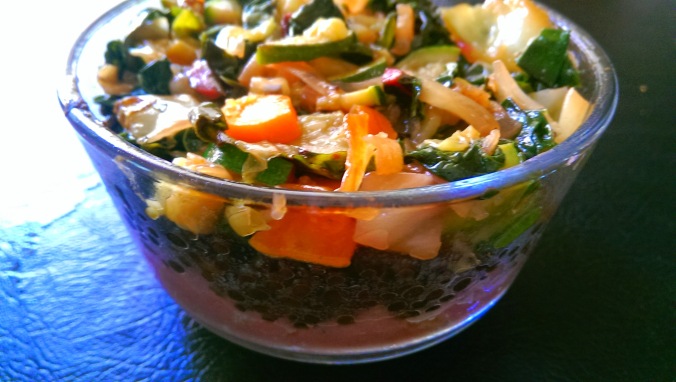 For my family and guests I topped it with goat cheese which offered a nice creamy, rich bite on top. 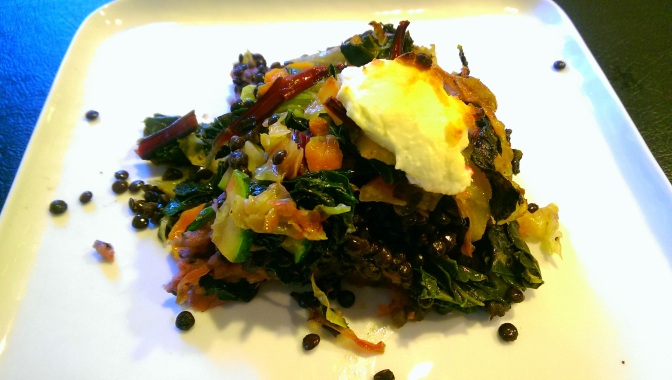 For myself, I topped it with a shiitake “bacon” I made (recipe here) which offers a nice salty, smoky rich flavor and beautiful complexity to the dish.

Or you can eat it as is without the extra garnish. The perfect winter bake with a good mix of veg, protein and starch to keep you warm and satisfied.

In a heavy pot, heat 1 tsp olive oil, add shallot and sautee for 1 minute. Add in garlic and remove from heat. Set aside in a large mixing bowl (to be used for mashing the potato). Add potatoes to pot and cover with cold water so completely covered, stir in salt. Starting the potatoes in cold water helps them cook more evenly. Bring to a boil and reduce to a simmer. Check potatoes after about 5 minutes and keep checking until cubes are soft and can be pierced with a fork to the center. Drain water and place potatoes into the bowl with shallots and garlic. Add 3 Tbs olive oil, ghee, rosemary, thyme, and balsamic vinegar and mashed to desired consistency. Salt to taste.

Heat oil in a heavy pot over a medium flame and add cumin powder and cayenne. cook for about 30 seconds until fragrant and add in onion, and cook until translucent (about 2-5 minutes). Add garlic, stir, and add lentils, stock and water. Bring to a boil then reduce heat to allow to simmer covered for about an hour – all of the liquid should be absorbed but don’t allow to dry out and burn.

Heat ghee in a pan over a medium flame and add onion, and cook until translucent (about 2-5 minutes). Add cabbage and cook for 3-5 min before adding remaining veggies and stock. Cook until veggies wilted (but not mushy) and stock evaporated.